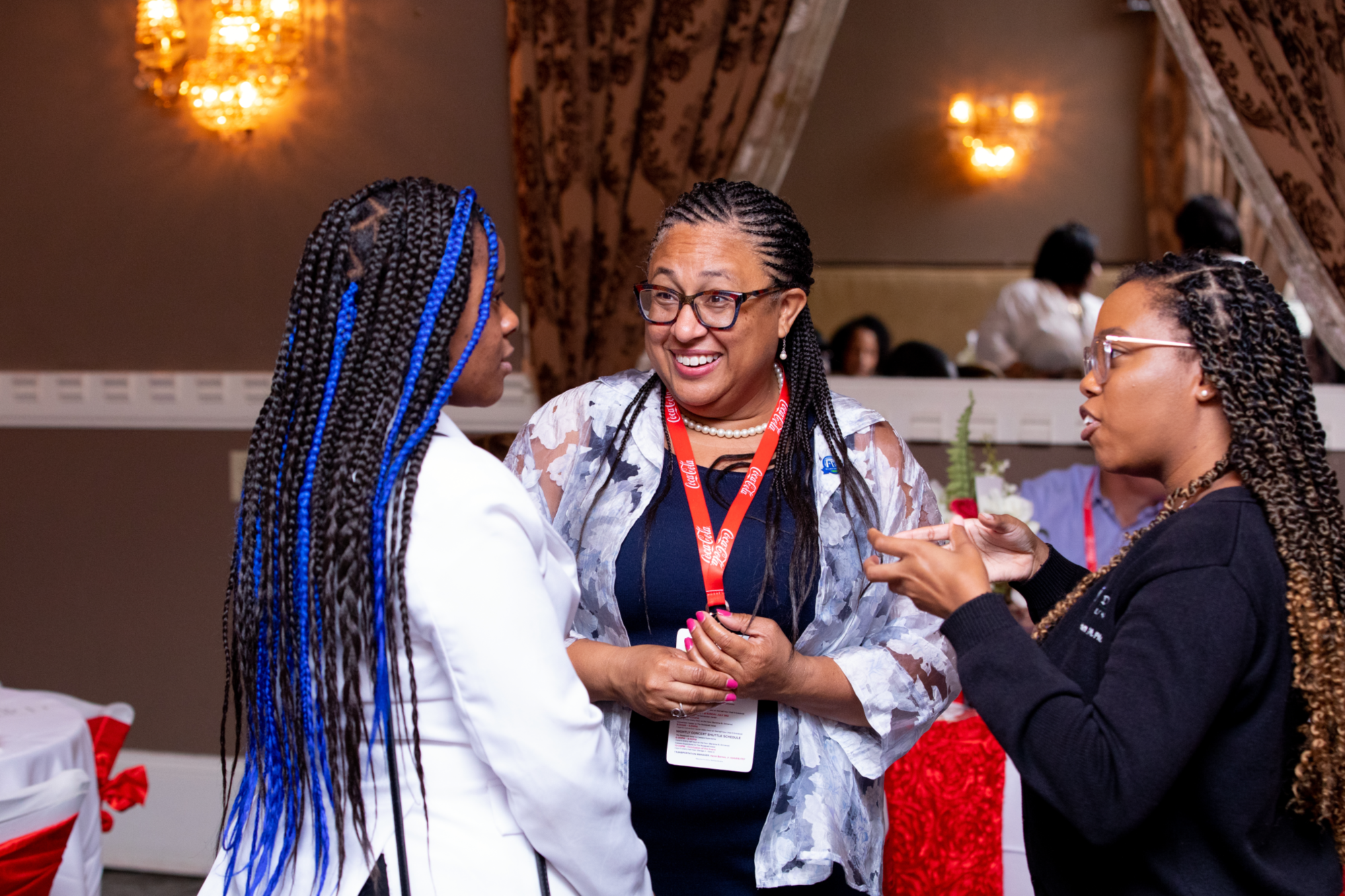 From the first day of the ESSENCE Festival of Culture to the last, Dillard was represented in some way somewhere, seemingly everywhere. As thousands of elated festival fans converged on New Orleans, the Jewel of Gentilly found itself in the thick of one of Black America’s favorite celebrations.

JaKiyah Steinbrook ‘23 was the first Bleu Devil to make an appearance during the highly anticipated weekend. Following the ESSENCE Fest press conference at Ashé Power House Theater, the chemistry major joined a group of peers from other institutions to participate in a panel discussion about the value of HBCUs. During the discussion, Steinbrook proudly told the story of how she toured 46 colleges and universities across the country, but Dillard was the one that “felt like home.” The June 30th panel discussion was moderated by D’Shonda Brown, associate editor of ESSENCE and ESSENCE Girls United.

The next day, Dr. Yolanda Page '91, vice president for academic affairs, made an appearance. A member of Alpha Kappa Alpha sorority, Page served as a panelist for a discussion following a screening of the documentary “Twenty Pearls: The Story of Alpha Kappa Alpha Sorority, Incorporated”. The screening was part of the ESSENCE Film Festival. Later that night, Edward Buckles Jr. ‘15 celebrated the upcoming release of his documentary “Katrina Babies” at the HBO Max Scene in Black welcome mixer.

Dillard was represented first thing in the morning on day three. Dr. Mona Lisa Saloy and Malik Bartholomew '04 were both on hand at 8 a.m. for the 2022 Maafa Commemoration at Congo Square. Saloy, Conrad N. Hilton endowed professor of English and Louisiana poet laureate, served as the 2022 grand griot, the highest honor at Maafa. Bartholomew, University historian, spoke about the history of Congo Square, the development of Maafa and the purpose of the ceremony. Bartholomew also conducted tours of parts of New Orleans for guests of the city during the weekend via his Know NOLA Tours.

Less than a mile from Congo Square, Dr. Rochelle Ford was making her first official public appearance as the eighth president of Dillard. By invitation of Thea Faulkner ‘83, Ford gave opening remarks at the Women for Progress of Mississippi’s Breakfast Roundtable at the New Orleans Marriott. From there, Ford darted two miles to Neyow’s Palace where she and other HBCU presidents participated in a brunch with students from Warren Easton Charter High School. Immediately afterward, the highly energetic president went to the Ernest N. Morial Convention Center where she connected with her sorors of Zeta Phi Beta to learn about the sorority’s Black Women Lead initiative with Google.

Meanwhile, at the Sugar Mill, Zella Palmer, director of the Ray Charles Program for African-American Material Culture, moderated the panel discussion “A Chef’s Journey” for ESSENCE Eats. Sponsored by the James Beard Foundation, the panel featured local chefs and a local restaurateur sharing their challenges and wins as leaders in the food industry. Kristi Coleman ‘08 hosted another ESSENCE Eats panel discussion. Across the street at the convention center, students from the Emerging Scholars Program got the opportunity to enjoy the festivities.

To cap the weekend off, Ford met more students and a familiar face from the Office of Recruitment, Admissions and Programming surprised the Dillard community. Christopher Stewart ‘08, associate director of recruitment, admissions and programming, appeared with a choir that sang with Darrel Walls and Tamar Braxton in a superlounge performance. Earlier that evening, Ford got a chance to meet a group of students who volunteered for the 2nd Annual CROWN Awards which honored Black women who have impacted their communities and the entertainment industry while advancing Black beauty. The marketing firm Joy Collective selected Dillard as a partner for the awards ceremony and several other events over the weekend, and event organizers took note of the students’ work. Nikki Jennings, senior director of Grassroots Marketing and Events, reported to Ford that all of the volunteers received job offers as a result of their work.