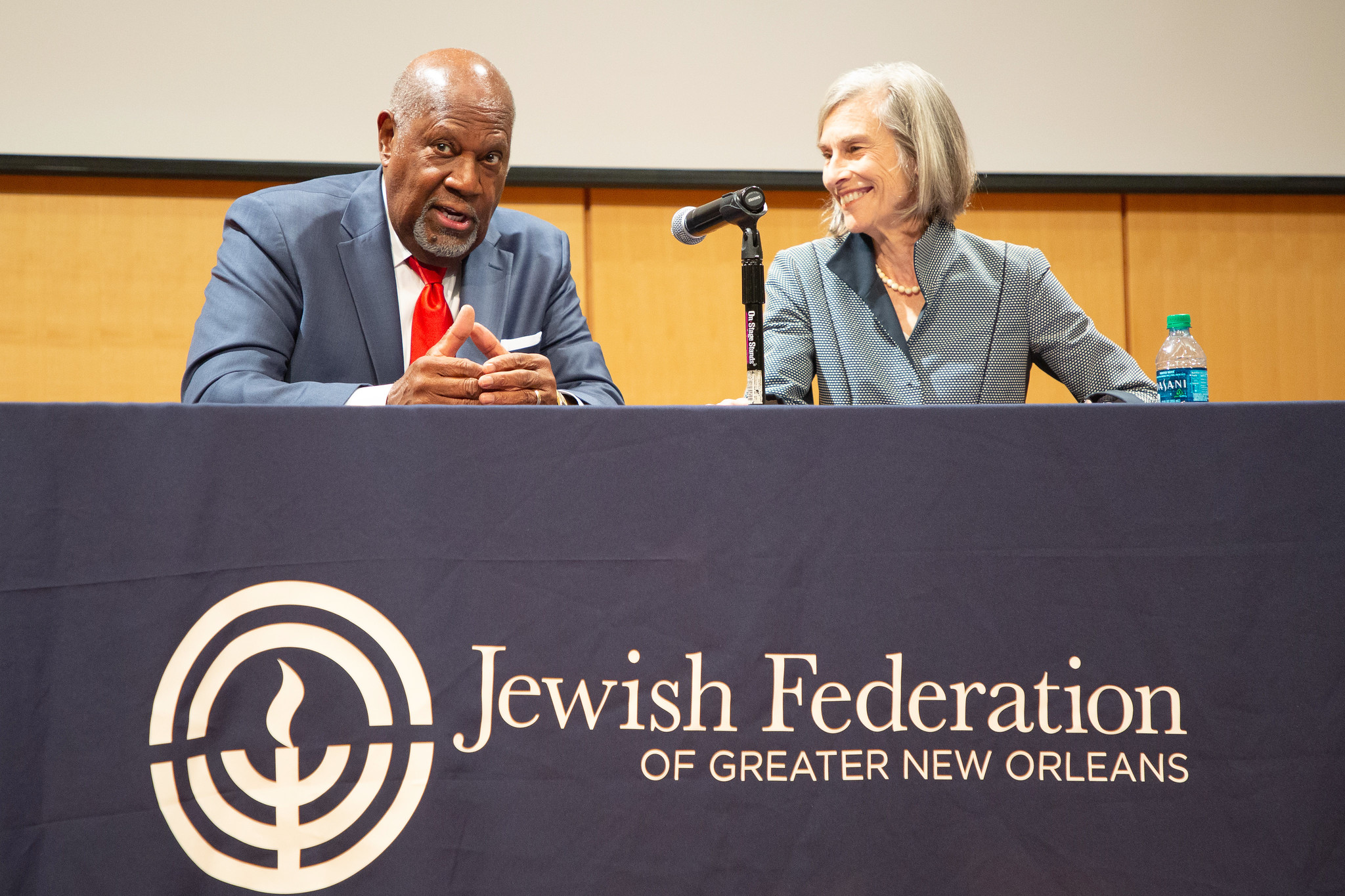 Robert G. Stanton, former director of the U.S. National Park Service, and Stephanie Deutsch, author of "You Need a Schoolhouse," speak about the life and legacy of Julius Rosenwald at the HBCU Speaker Series in 2019. Photo: Sabree Hill/Dillard University.


Dillard, in conjunction with the Goldring Family Foundation Center for Jewish-Multicultural Affairs and the ADL, will hold a virtual discussion called "Combating Racism, Antisemitism, and Bigotry." The event will be moderated by Aaron Ahlquist, the director of policy for ADL Southern Division and he will be joined by U.S. Rep. Troy Carter (LA-02) and U.S. Rep. Lois Frankel (FL-21). The discussion will happen 6 p.m., October 7 on Zoom.


The event is part of the Jewish Federation of New Orleans’ HBCU Speaker Series. The series is meant to educate and engage Greater New Orleans’ Jewish and African American communities in order to build understanding by exploring topics of mutual interest. The last time Dillard hosted the HBCU Speaker Series was September of 2019. 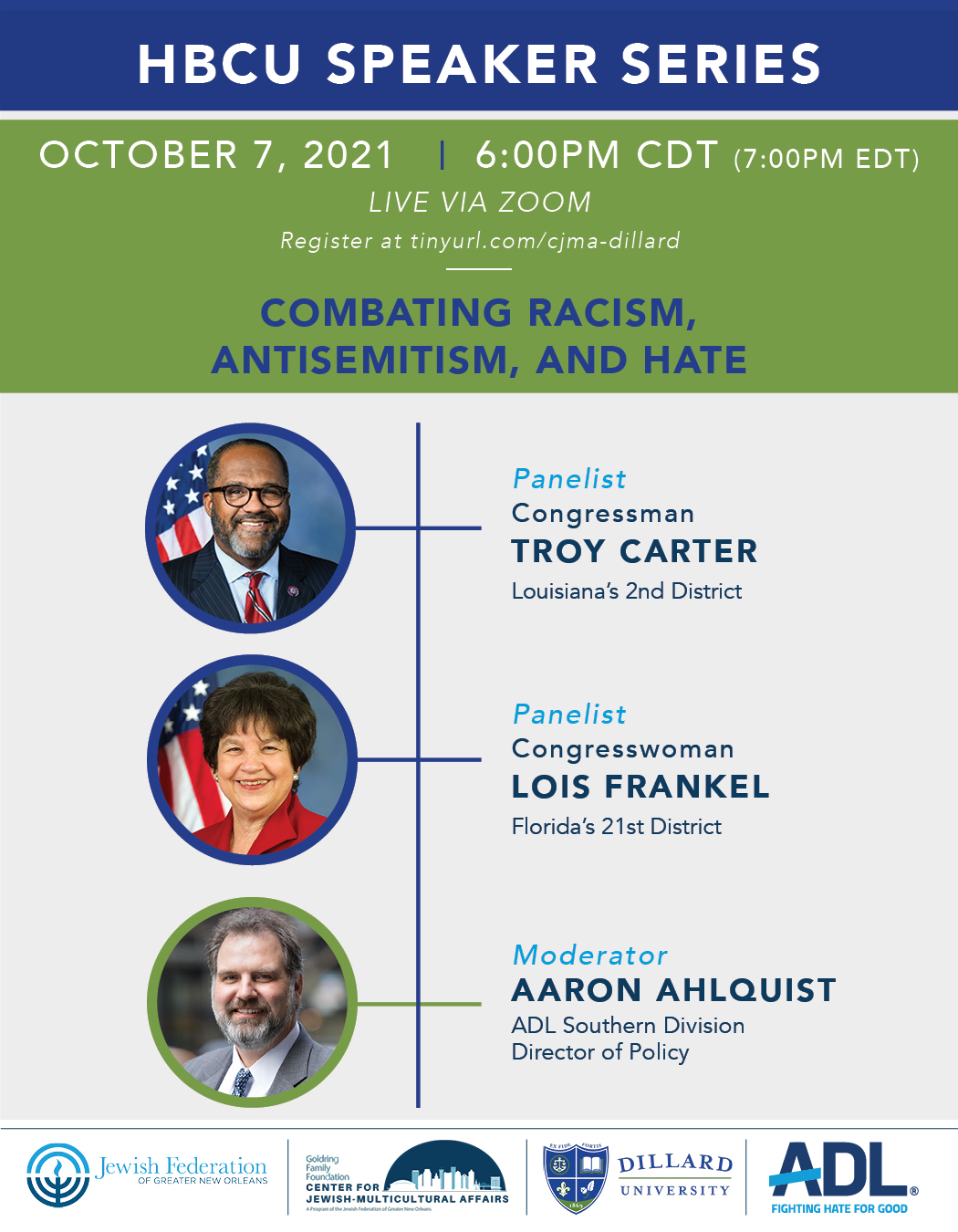 The October 7 event sets out to discuss how the Jewish and Black communities can work together with Congress to address increased acts of violence against the communities in recent years. The ADL monitors, tracks and responds to antisemitism and other forms of bigotry in the United States. The organization's 2019 Audit of Antisemitic Incidents recorded more than 2,100 acts of assault, vandalism and harassment--a 12 percent increase from the previous year. One of the most infamous incidents was the 2018 synagogue shooting in Pittsburgh where 11 people were killed and six injured. The suspect frequently reposted antisemitic content online. In 2019, John Timothy Earnest killed one and injured three in a synagogue shooting in Poway, California.


Dillard’s engagement with the Jewish community dates back to the presidency of Dr. Samuel DuBois Cook. The effort began with an exchange when Cook was a graduate student at Ohio State University. A professor who had taken Cook under his wing said, “You know Sam, I’m a member of a minority, too,” according to a 1990 New York Times article. After Cook responded that he believed the professor to be white, the professor revealed that he was Jewish. That put Cook on a journey to eventually lead to the establishment of the National Conference on Black-Jewish Relations at Dillard. Having worked with Jews during the Civil Rights Movement, Cook sought to bring that collaboration back amid differences that had developed among African Americans and Jews.


The HBCU Speaker Series is meant to continue collaborative efforts that lead to actionable steps both locally and in Washington, D.C. The ADL, the Jewish Federation and the local HBCUs (Dillard, Xavier University of Louisiana and Southern University at New Orleans) aim to attract students and point them to resources to help them battle hate such as the ADL’s incident form.


The Goldring Center for Jewish-Multicultural Affairs seeks to foster relations among diverse local groups, including the Jewish, African-American, Latinx, Multi-Faith communities. The center also seeks to enhance opportunities for the LGBTQ Jewish community.


To register for "Combating Racism, Antisemitism, and Bigotry," click here. The event is free and open to the public.