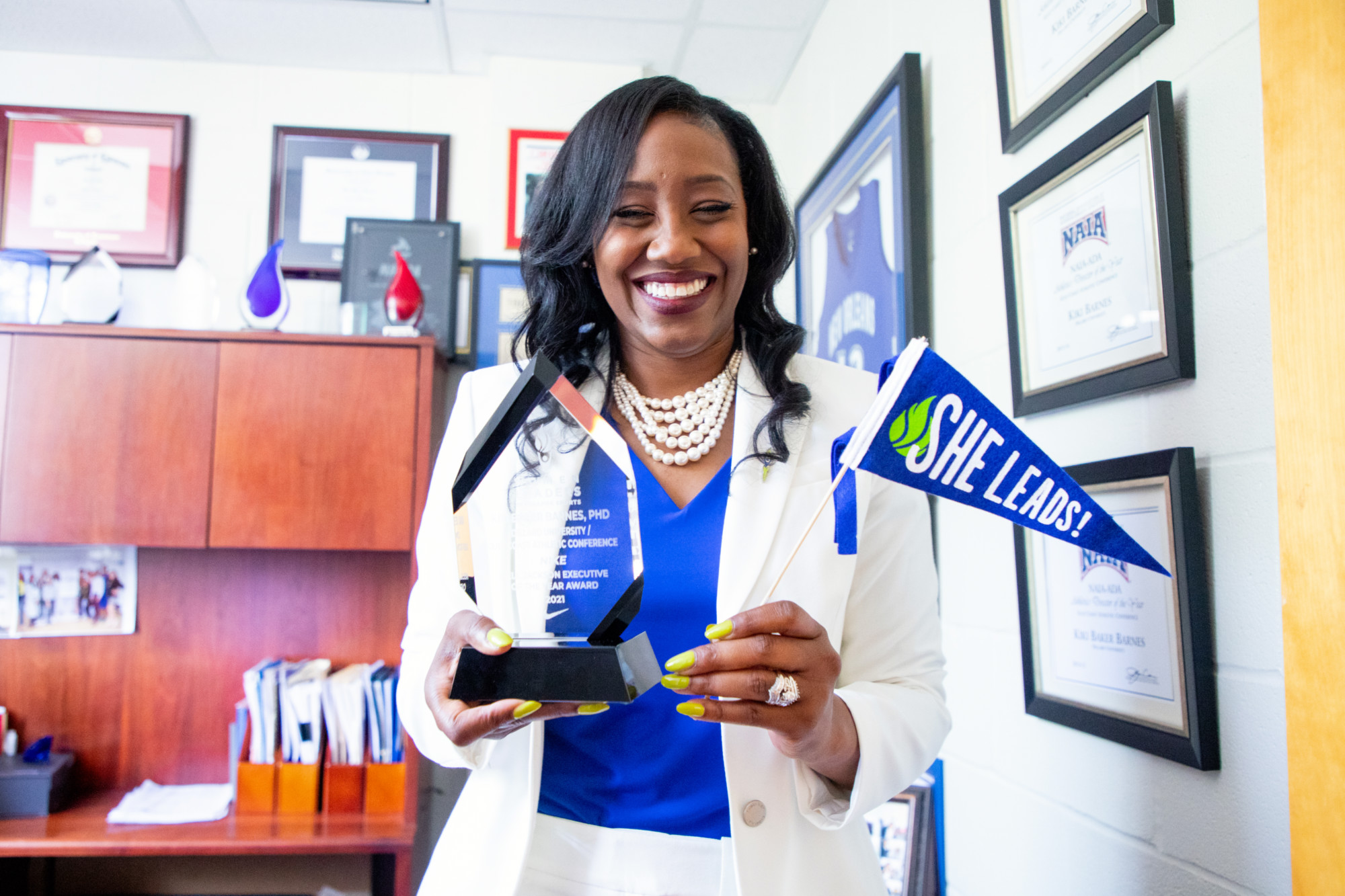 After 17 years of dedicated service, Dr. Kiki Barnes, Ph.D., director for Dillard’s Department of Intercollegiate Athletics, has announced her resignation from Dillard University. Barnes is slated to become the next commissioner for the Gulf Coast Athletic Conference (GCAC), making her the first Black female commissioner in the conference’s history.

Barnes was named interim athletics director and head coach of the women’s basketball team in 2006, one year after Hurricane Katrina devastated the campus as well as several athletic and academic programs. The athletics department was left with only three of six sports teams needed to maintain membership within the National Association of Intercollegiate Athletics (NAIA). Restoring an entire athletics department may have been a daunting task for others, but Barnes was up for the challenge of regaining national prominence in athletics and academic excellence.

Under Barnes’ leadership, Dillard has enjoyed a winning tradition. The Bleu Devils earned their first national title in program history when the men’s track and field 4x100 relay team won the 2021 NAIA national title. Dillard’s teams have made four national championship tournament appearances, they have won nine GCAC championships and the University won the GCAC’s Thomas Howell Cup for the first time. Dillard has also produced 55 NAIA All-Americans with Barnes at the helm. Barnes’ coaches have won GCAC Coach of the Year honors a combined six times.

Accepting the role of commissioner won’t be Barnes’ first stint with the GCAC. She was recently named interim commissioner for the GCAC of the NAIA, in addition to serving as president of the GCAC from 2009-2018, directing its growth after several universities departed for other conferences. "Kiki has stepped in time and time again to lead GCAC when asked to. It is only fitting to have her fully take over the conference and build it into a national model for NAIA. We are getting an experienced AD who has national prominence in athletics. She will be able to take lessons learned at Dillard and help many schools build their athletic programs,” said President Walter Kimbrough.

Barnes’ tenure at Dillard has been marked by an impressive stream of honors and achievements. Earlier this year, Barnes was featured as part of Sports Illustrated and Empower Onyx’s “Elle-vate: 100 Influential Black Women in Sports” series. In 2021, she was selected Nell Jackson Nike Executive of the Year by Women Leaders in College Sports; and in 2019, Barnes was selected as a National Association of College Directors of Athletics Under Armour Athletic Director of the Year. Among Barnes’ other honors are:  GCAC Athletic Director of the Year (2011, 2014, and 2015), one of Gambit’s “Top 40 Under 40 New Orleanians Making a Positive Impact on Their Community”, and 2018 New Orleans CityBusiness Woman of the Year.

Barnes has been a fierce leader in athletics and a model for success to her colleagues and students at a University that epitomizes the strength and excellence of HBCUs. “It has been an honor to lead the athletics program. We’ve triumphed on and off the courts—from reinvigorating the sports program following Hurricane Katrina to establishing the University’s first endowed athletic scholarship, introducing new sports programs, and developing student-athletes who are equally committed to academics, sports, and service. I am forever grateful to Dr. Kimbrough, my staff, colleagues, student athletes, alumni and the community-at-large for trusting me and for serving as strong collaborators for Dillard’s athletic programs,” Barnes said.

Barnes will finish her tenure with the University through the end of the 2021-2022 spring semester.