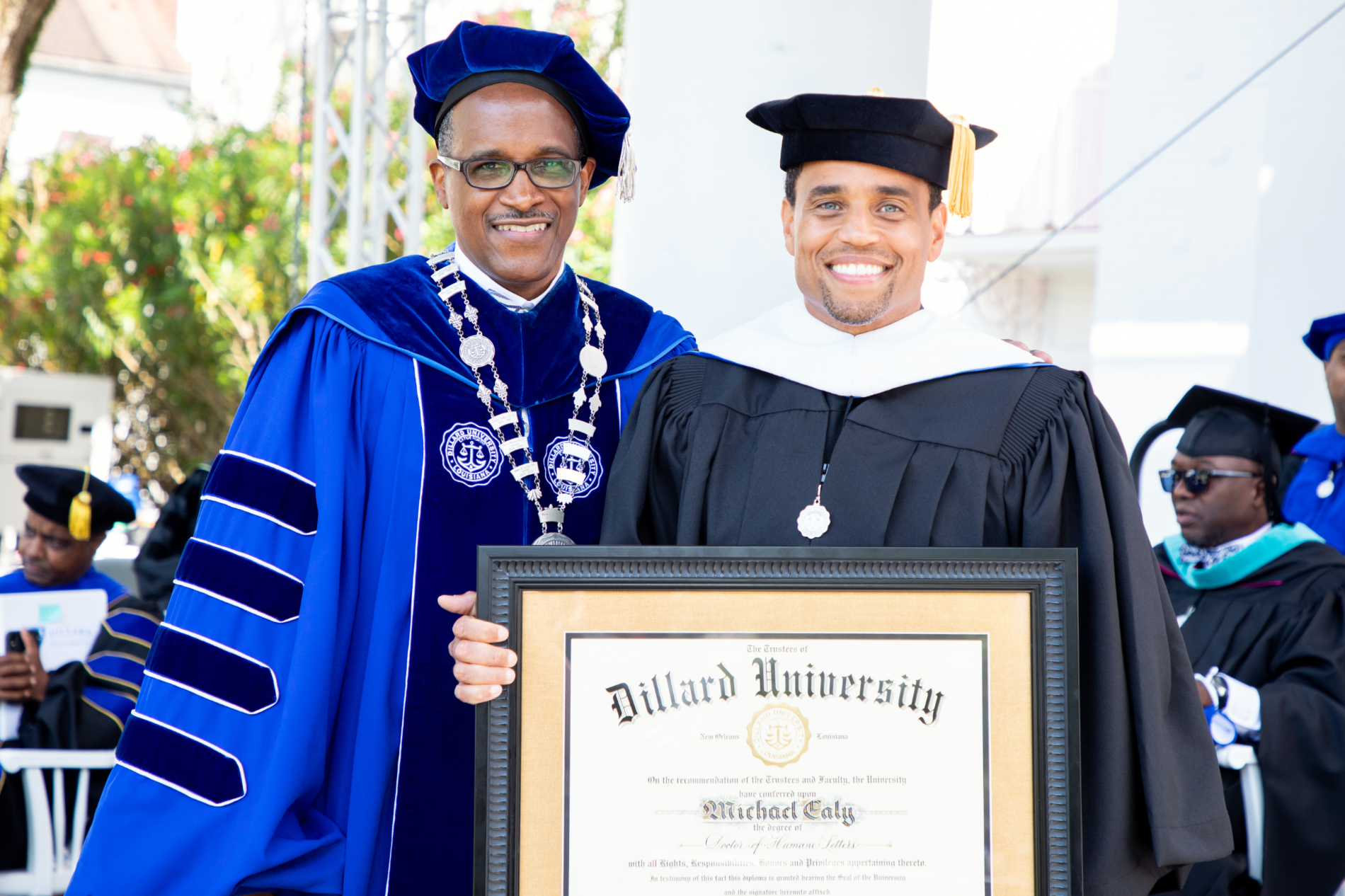 On the morning of May 15, actor and producer Michael Ealy spoke frankly to the Dillard University class of 2021 about the value of individualism as a way of staying ready for the unexpected in life. In the first commencement held on the Rosa Keller Freeman Avenue of the Oaks since 2018, Ealy spoke to an audience that was masked, distanced and of limited size due to City of New Orleans COVID-19 event guidelines. On a sunny and clear morning with the temperature in the mid-70s, Ealy began his address by taking note of the conditions, "This is a very, very beautiful morning. I don't think it could have been more beautiful than this."

Ealy then quipped that he was using pleasantries to stall due to nervousness, however, the audience's encouragement carried him into his message. Despite his visible nervousness, the "Barbershop" star gained a collective vote of confidence when he remarked, "My mother and father always taught me that when my people call, I answer." Noting Dillard's past "amazing" commencement speakers, Ealy began to settle into his speech when he jokingly provided the disclaimer that he would neither pay the graduates' student loans as billionaire Robert F. Smith did for the Morehouse College class of 2019 nor sing as recording artist John Legend did for the Duke University class of 2021.

The class's first dose of inspiration came with Ealy stressing the importance of being ready. Reflecting on having played the character Teacake in "Their Eyes Were Watching God," Ealy admitted to the audience that he "got comfortable" and believed that "the struggle was over," referring to his days of waiting tables with no health insurance. Suggesting that he did not get the roles he desired as he expected following the film, Ealy explained that "life isn't linear." Pushing his message of staying ready; however, Ealy then said, "The next time failure comes, don't look at it as a bottomless pit but as a hurdle."

Ealy's address gained intensity when he encouraged the graduates to invest in their own individuality as a way to reach success in their careers. He called on the class of 2021 to reject fitting into other people's expectations and an American social system that he views as flawed in favor of finding their own way. Ealy even warned parents, "Don't force your dreams deferred upon your children." His points converged when Ealy explained that the graduates' being true to themselves will help them stay ready for both the expected and the unexpected.

"It will take me days to fully process what happened today on the Avenue of Oaks," said President Walter Kimbrough. "We celebrated a class that spent their last year and a half of college during a pandemic. It has been a time where the unexpected happened, and today, Michael Ealy unexpectedly delivered one of the best commencement speeches I have ever heard."

Ealy's appearance at Dillard's annual commencement follows a pattern of notable figures who are not regulars on the college commencement circuit. In 2016, Terrence J, who also noted Dillard's impressive list of speakers, delivered the address. In 2017, it was Janelle Monáe, Chance the Rapper took the stage in 2018, Regina Hall addressed the class of 2019,  and native New Orleanian Rocsi Diaz delivered a special message for the class of 2020's virtual degree conferral.

"I have always preferred new voices for commencements," said Kimbrough. "I am convinced that there are people of substance with something to say but they are never given an opportunity. There are lots of safe speakers that we know will be fabulous, or respectably boring. But I take risks on new voices, because that is where you get the greatest blessing. Michael Ealy blessed us immeasurably today."

After his address, Ealy was awarded a Doctor of Humane Letters by the University.