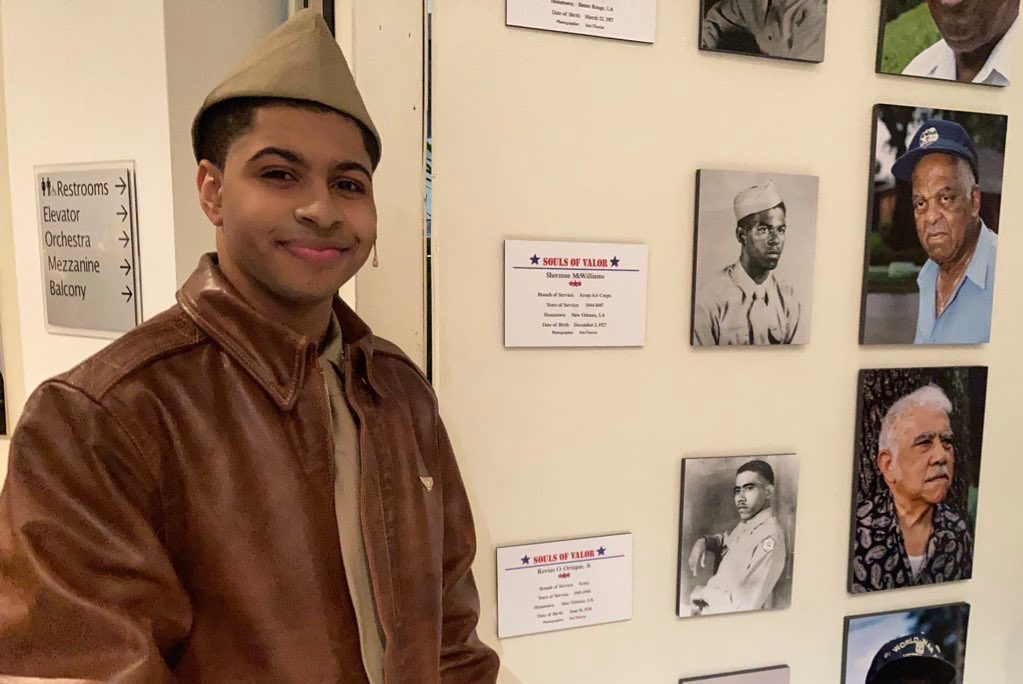 Earlier in the semester, the Jefferson Performing Arts Society (JPAS) staged its production of Ricardo Khan’s and Trey Ellis’ “Fly” with two Dillard theatre majors involved in the play. Atlantis Clay ‘22, an Oakland, California native whose concentration is theatre performance, landed a lead role; and Nailah Dabon ‘22, a New Orleans native whose concentration is theatre technology, served as the assistant stage manager for the production.

“Fly” tells the story of four Black soldiers who train in Tuskegee, Alabama to become combat pilots for the U.S. Army Air Forces’ 332nd Fighter Group during World War II. With the story set in 1943, Clay played J. Allen Braithwaite, a West Indian who is admitted to the program. For the role, Clay said that he did extensive research on the West Indies, learning Jamaican patois and even studying Jamaican activists.

“I took the time to look through the script and found myself identifying the similarities I and J. Allen had. The promise to our parents to honor them and follow through with their dreams was something I had in common with J. Allen,” he said. Because of their similarities, Clay said that he grew with Braithwaite as rehearsals went on.

Clay said that his Dillard training is the reason he was up to the challenge of playing an important lead role in a production that was also significant for JPAS. “There’s always been a standard of professionalism (in Dillard’s theatre program). Being prepared at all times is something I learned that has helped me throughout this whole process of working with JPAS…I’d personally like to thank my professors, Cortheal Clark and Raymond Vrazel, for their help in preparing me for such an opportunity.”

Working with JPAS has also provided lessons for Clay. “One of the things that I have learned working with JPAS theater is that professional work is a collaborative effort where everyone effectively does their part.”

A particular honor for Clay was to play a historical figure aligned with the experiences of former Dillard president, Dr. Broadus N. Butler, and late alumnus, Justice Revius O. Ortique Jr., both of whom were Tuskegee Airmen. “It feels really good to honor that piece of DU history,” he said. “It brings warmth to my heart when the stories we are able to tell bring back the memories of our people.”

Meanwhile, the audience could not enjoy Clay’s performance and the work of his castmates without the critical work happening backstage. As an assistant stage manager, it was Dabon’s job to help make sure that everything was in place for the actors, especially props and costume pieces. That means Dabon has to be very organized and on the same page with her fellow crew members.

For Dabon, Dillard Theatre prepared her for the challenges of stage management by teaching her to be “over-prepared.” The trick, she learned, is what those in the theatre program call “scenic ballet,” which is understanding how everything should flow both backstage and on stage.

The activity backstage can sometimes be frenetic, so Dabon has to go the extra mile. “I think the most difficult part of stage management is learning the needs of the director, every cast member and every crew member to keep up good morale and dissolve conflicts,” she said. Still, she finds it exciting to work with highly talented people. “The creativity and discipline that Dillard allowed me to experience helped shape me into the confident stage manager that I am today.”

To learn more about the Dillard University theatre program, go to https://www.dillard.edu/theatre.