Office of Communications and Marketing 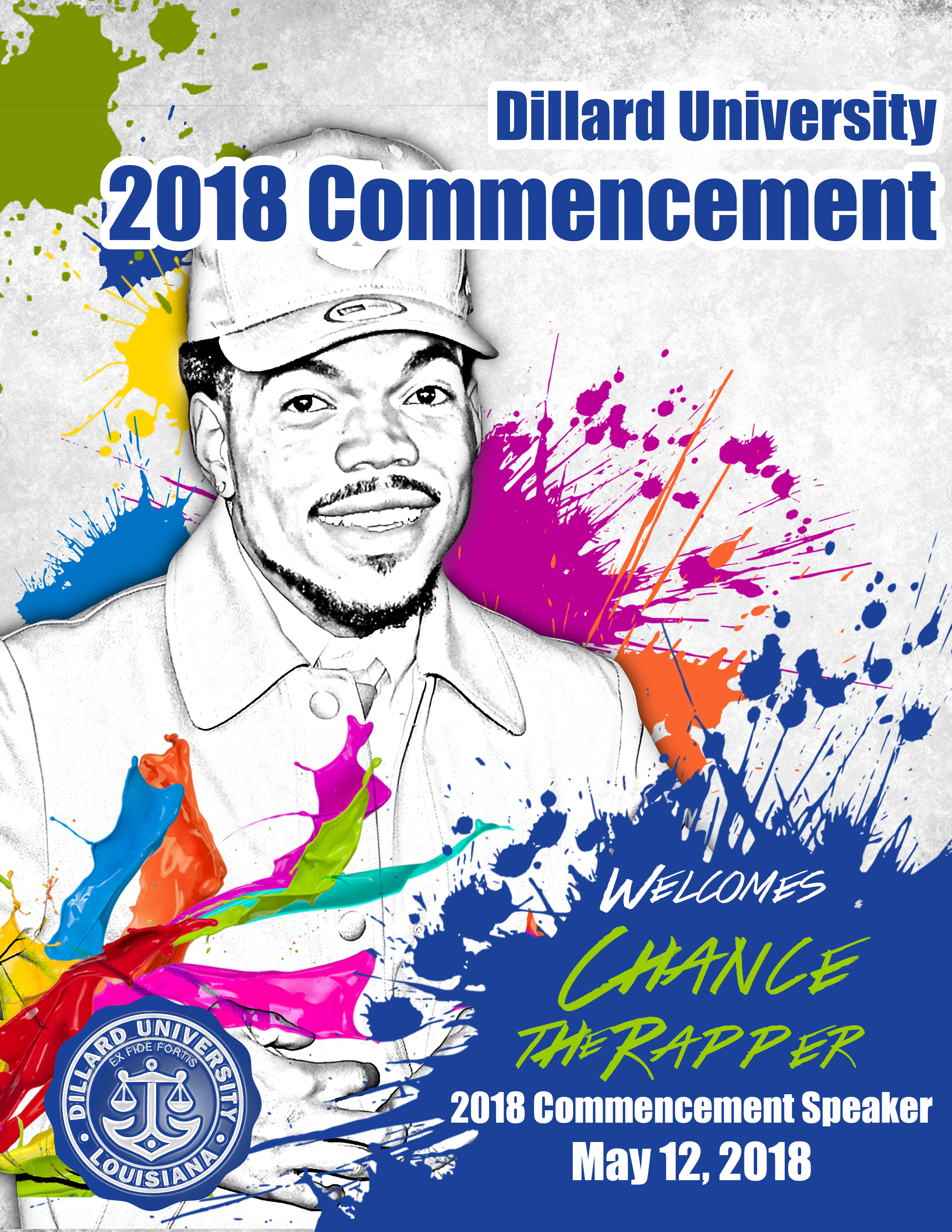 NEW ORLEANS – Dillard University will hold its 82nd Commencement on Saturday, May 12, at 8 a.m., on the historic Avenue of the Oaks. The University will confer more than 200 undergraduate degrees next month.


Dillard is proud to announce that the Grammy Winning Artist, Chance the Rapper will deliver this year’s commencement address.


Chancelor Bennett, Chance the Rapper, is a hip-hop artist, singer, songwriter, and record producer, whose rise to mainstream success has been unprecedented as an independent artist. In 2017, his Coloring Book became the first streaming only album to be nominated and win a Grammy. Without even signing a record deal, Bennett’s strategic  move has undoubtedly changed the music industry forever.


“He is part of a new wave of artists that can openly talk about faith while being in hip hop, as he says ‘I speak to God in public,’ balancing the secular and the sacred,” said Dr. Walter M. Kimbrough, president of Dillard University.


Kimbrough teaches a class on ethics and hip hop, has sought Bennett appearing on campus for two years, for a multitude of reasons. “He's not signed but a multiple Grammy winner,” said Kimbrough, who’s also known as the Hip-Hop Prez, while adding that Bennett gives away his music, movie tickets, Jordans, and awards to school teachers. “He's the artist that your grandmother would love.”


Bennet, 24, first garnered media attention in 2012, just after graduating from high school in his native Chicago. He was listed in Complex magazine's "10 New Chicago Rappers to Watch Out For.” Now, he’s known for his lyrical dexterity, soulful melodies, with choirs and religious reference throughout the songs.


Students gather in the Dillard University Professional Schools and Sciences Building to receive news about the 2018 Commencement Speaker.

He contributed to Kanye West's album The Life of Pablo, 2016, as a co-writer and was featured on several tracks. Bennett has also collaborated with H&M, Nike and has appeared Saturday Night live and the ESPN’s Espys Awards. But almost as much as he receives, he gives away.


Bennett has been intentional with using his ever growing popularity to give back to his hometown of Chicago, especially the youth who admire him. In 2014, Chance used #savechicago to stop gun-violence for 42 hours and since then, he’s forged ahead. And for three years, whether through hosting monthly high school OpenMike series at Chicago’s Public Libraries, raising over $100,000 to bring sleeping-bags and  coats to Chicago's homeless, or raising over $4 million for his local Chicago Public School System, Bennet makes helping others a priority. Bennett is the founder and president of SocialWorks, a nonprofit created to empower youth through the arts, education, and civic engagement, and it’s his aim to continue to reshape the possibilities through freedom and access for the youth of Chicago and the globe.

“The activism is a bonus with Chance,” Kimbrough said. “I thought he made for a great commencement speaker because of his spirit of being entrepreneurial and authentic. But his civic engagement, including encouraging people to vote and willingness to speak out on issues, like his recent opposition to a Heineken ad, are just as paramount.”


Dillard is known for bringing in leading influencers throughout the world to be Commencement speakers or to participate in the President’s Lecture Series Brain Food. The University considers itself a place that not only educates some of the country’s top scholars and leaders, but a place where the community can come and learn.